The recently published HACR Empow(h)er™: Understanding Workplace Barriers for Latinas report highlights some of the daily challenges Latinas face in gaining access to leadership positions and promotional opportunities in Corporate America. While groundbreaking, the report is not the first time HACR has collected information on Latinas. In fact, HACR has been collecting demographic data on Latina representation in Corporate America since 2009. Let’s look at whether the demographic data on Latinas collected on the HACR Corporate Inclusion Index (CII) between 2015 and 2019 can help shed additional light on the findings from the HACR Empow(h)er™ report.

Every year the U.S. Census publishes a fact sheet on the Hispanic community for Hispanic Heritage Month (September 15 – October 15). In the 2019 fact sheet we see that Hispanics now comprise about 18.3 percent of the U.S. population. About half (49.5 percent) of Hispanics in the U.S. are female. That’s about 29.94 million Americans. Yet, Latinas, continue to be among the most underrepresented groups in leadership positions. On average, from 2015 to 2019 Latinas represented eight percent of all employees, which is a little over half of the average for all Hispanic employees (15.8 percent) during the same time period. However, when the figures for exempt positions are examined, we find that Latinas hold only three percent (3.4 percent) of positions. Exempt employees tend to have greater access to promotional and leadership opportunities. Exempt positions are also more likely to have access to leadership development resources such as mentorship and sponsorship programs.

On the other hand, being an exempt employee is no guarantee that you will be mentored. The HACR Empow(h)er™ report highlights how 48 percent of its survey participants did not participate in a structured mentoring program at their companies, with 22 percent saying they did not participate because it is not offered at their level. The CII supports these findings as the issue does not seem to be a lack of mentorship programs rather a lack of access to them. During the 2015-2019 survey cycles, 80 percent or more of our annual CII participants reported having a mentorship program at their company.

The HACR Empow(h)er™ report also found that 64 percent of their survey participants said Latinos face challenges in being promoted within their respective companies. For the past five years, the CII has shown that Latinas are underrepresented in companies’ leadership structure. Latina underrepresentation is particularly prominent among Class A[1] (1.22 percent), Class B[2] (2.15 percent), and Class C[3] (2.33 percent) employees. Unsurprisingly, the five-year average for board representation is also low, with Latinas holding only 1.78 percent of board seats during this time.

It’s not all doom and gloom, however. The report found that less than half (46 percent) of participants felt their career prospects were very or extremely promising. All we have to do as allies, supporters, employers, and decision makers is make it so that this feeling of optimism is nurtured and grows to convince the other half of participants that there is hope for progress. 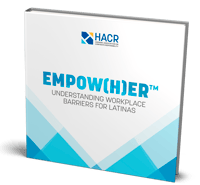 Download a copy of the Empow(h)er™: Understanding Workplace Barriers for Latinas report here.

[1] Class A Employees includes the CEO and his/her direct reports.

[2] Class B Employees includes the employees who report to the CEO’s direct reports.

[3] Class C Employees includes the employees who are two levels below the CEO and his/her direct reports.

*Although the terms "Hispanic" and "Latino/a" often have distinct meanings, in this publication we use the terms interchangeably.

June is Pride month, a month when many companies will spotlight their efforts around LGTBQIA+ representation within thei...

Sylvia Pérez Cash joined the HACR team in January 2021 as the senior vice president of operations, guiding the organizat...